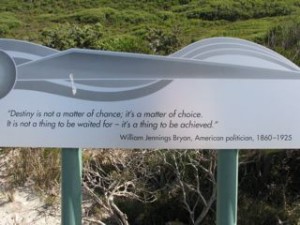 There are times when the Fates seems to step in and not just nudge you in the right direction, but push you headlong into whatever corner they determine you should be. Is that destiny? Is it fate? According to William Jennings Bryan “Destiny is not a matter of chance; it’s a matter of choice.” (The Albany Wind Farm has a series of quotes scattered around the walking trails and this one grabbed my imagination.)

Going to Albany was a choice, our choice, but then chance played her part. We ended up at The Terrace – a B&B on Middleton Beach – with two fabulous hosts. Dave (the talkative member of the duo) had more stories than most of us will ever have in our life time. Born and raised in Albany, his memories of growing up were evocative, entertaining and  just kept getting better. The lovely Anne’s breakfasts were as delicious as anything GW produces (and that is a huge compliment!). They sent us on a different journey each day. The only time we disregarded Dave’s advice (visiting the Blow Holes) we had to admit we’d made a mistake. He was right!

So I’ve decided that life is a bit of both. The Fates/Destiny can nudge you in the right direction, but you still need to have both eyes open and a willing heart. Maybe Mr Bryan is right – “Destiny is not a thing to be waited for, it’s a thing to be achieved.”

P.S (If you’re travelling to Albany, take our advice and stop off at The Terrace.) 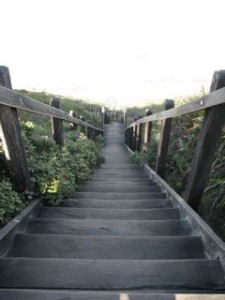 4 thoughts on “Fate or Destiny – Do we really choose?”