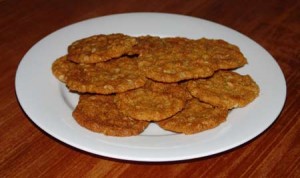 I’ve had a few emails asking about my recipe for Anzac Biscuits. In Border Watch, they are Lauren’s favourite treat and she coerces Morgan into cooking them as often as she can.

Yesterday we had a visit from a friend whose son is currently doing his second tour of duty in Afghanistan. Harry mentioned that they can send a two kilo parcel over to the troops for free. His wife was making Anzac Biscuits to put in a care package that will contain all sorts of other treats as well.  Apparently Anzac Biscuits keep really well and the troops love them – still!

It got me thinking about the origins of the humble snack so I did some research on the web. They date back to World War 1 when wives, mothers, girlfriends and organisations like the Country Women’s Association baked food to send to the troops. Since the average sea voyage from Australia to Europe took upwards of two months, the food needed to last. It seems a basic Scottish recipe was adapted and the humble Anzac Biscuits was born.

Below is a recipe I’ve copied from the Australian War Memorial site. Hope you enjoy it.

And while you’re eating them, remember the men and women still serving our country who find a small slice of Australia in the ragged shape of an Anzac Biscuit!

The popular ANZAC biscuit is a traditional, eggless sweet biscuit.

The following is a original recipe provided by Bob Lawson, an ANZAC present at the Gallipoli landing.

1. Grease biscuit tray and pre-heat oven to 180°C.
2. Combine dry ingredients.
3. Melt together butter and golden syrup. Combine water and bicarbonate soda, and add to butter mixture.
4. Mix butter mixture and dry ingredients.
5. Drop teaspoons of mixture onto tray, allowing room for spreading.
6. Bake for 10 to 15 minutes or until golden. Allow to cool on tray for a few minutes before transferring to cooling racks.