I’m very excited to welcome Christina Phillips to my blog today. Her new book FORBIDDEN will be released Tuesday, 7th September. FORBIDDEN is an Ancient Historical Romance that’s hotter than hot. I’ve always been a bit of a history nut and the Romans just seem to encapsulate the essence of powerful warriors. Christina’s  hero, Maximus, leaps off the page, sword raised, just begging to be taken home 🙂 He’s gorgeous! I can’t wait to read the whole book… sigh…

Christina, a quick google search reveals there aren’t many Ancient Historical Romances out on the shelves. (I did find a wonderful B&B in the heart of Rome called Ancient Romance as a bonus!) The term sums up your writing perfectly. Can you tell us about the era in which you’ve set Forbidden?

Hi Helene, thank you so much for having me on your blog today and for that absolutely fantastic introduction! I would be delighted to tell you a little about the era in which FORBIDDEN is set.

The year is AD 50. The Romans have occupied Britain for the last seven years, but have their eye on conquering the western peninsula and claiming the rich mineral deposits of Cymru (modern day Wales). The Roman Emperor, Claudius, was also obsessed with eliminating all trace of Druids throughout his Empire which as it happens fitted in with my plot perfectly!

(I love the sound of that B&B in Rome!! I wonder if I could visit and claim it as a tax deduction for research??)

I think you definitely should visit the B&B and there’s no way the taxman could prove it wasn’t research 😉 Was history your favourite subject at school? Where did the passion for ancient Rome come from?

I did love history at school, and along with English it was my favourite subject. Although having said that I never got very excited by the Agricultural or Industrial Revolutions! But give me the Tudors, the Plantagenets, Saxons, Vikings and Romans and I was enthralled. Given how much I loved reading historical novels while I was growing up, you’d think I would have gravitated towards writing them a lot sooner than I did (it took me nine years of writing with the aim of publication before I realized!!)

I was born in England, so was lucky enough to visit lots of fabulous historical sites as a child (not that I appreciated them at the time. I could kick myself now!) I’d always been fascinated by the Romans, and remember watching I, Claudius as a very young child and being completed captivated/scandalized by it all!!! But it wasn’t until very recently I decided to try and write a book set in that era and the reason I did was because Maximus and Carys (and the deliciously bad villain, Aeron) literally fell into my head one night and refused to go away!

Concentrating with a head full of gorgeous men must have been very difficult…How much real history drives the direction of your story? 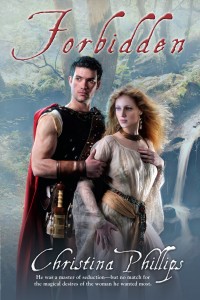 power of their gods and goddesses and when those deities are crossed then watch out world.  However, when it comes to actual dates and events I tried very hard to stick to known facts.

For instance, the Romans first invaded Cymru in AD 50, so that’s the year I set my book. They faced fierce and ongoing resistance from the local tribes and happily for me this fit my purposes (this continues in Captive, book two in the series). Wales, and especially the Isle of Anglesey situated off the north-west coast, were known Druid strongholds which again was perfect for my plot.

I lived in North Wales for a few months and was captivated by the wild beauty – perfect setting for your stories. I love your Historical Bits and Pieces page on your website. You clearly did a lot of research for your story. How did you approach that? Was it organic or more systematic?

Thank you, Helene! With the research, a lot of it was organic but with things like the hierarchy of the Roman Legions I researched that before I started, just so I had it straight in my own mind, even if little of it made it onto the actual page. I researched the Celtic gods and goddesses and the little we know of the Druid culture. And there’s the thing – we don’t know that much about the Druids because all their knowledge was handed down through oral teachings. So I managed to have a lot of fun there!

Call stories are always inspirational. What was yours?

It took nine months to finish Forbidden. I sent queries out to twelve agents, and a month to the day I queried my agent she offered representation. I didn’t sleep at all that night!!

Three months later we had a two book deal from Berkley Heat.

What a wonderful story, Christina!!  How have you found the publishing process since then?

Honestly, it’s everything and more than I dreamed about. And even on the bad days, when all I want to do is crawl under a rock and hide, I soon make myself snap out of it. Because really, this is what I’ve been working towards since April 1999 and I’m determined to enjoy every step of the journey as much as I can possibly can.

I’ve just finished a historical romance set in a different century that I’m very excited about.  I have everything crossed that might be the start of a new series. I’ve also written two outlines for two further books in the Forbidden series, and we’re waiting to hear back on them.

Good luck with those submissions, Christina!

And for one lucky visitor, Christina is giving away a copy of FORBIDDEN. Tell us who your favourite Ancient Hero is and go into the running!! Alexander the Great gets my vote:-)

Click on the trailer below for details of Christina’s Blog party for the launch of FORBIDDEN – It’s tomorrow on the 1st September so make sure to drop round and join in the fun.

Born in the UK, Christina met her very own hero when she was just fifteen, was married at twenty and went on to have three wonderful children. To get her through her driving test after baby #2 was born, she wrote a couple of romances to keep her mind off reversing round corners. It turned out to be a very good diversionary tactic but unfortunately all she received in the mail were form rejections from Harlequin Mills and Boon (she did pass her driving test though, so there was some method in her madness).

“After moving to Australia in December 1998 she decided to get serious about her writing and joined the eHarlequin community. It was there she hooked up with her fabulous CPs. These girls not only help keep her sane but share her love of gossiping on IM, drooling over hot heroes and wearing glittery tiaras at romance conferences.

Christina is a member of the Romance Writers of Australia, RWA Paranormal Group, RWA Historical Group and RWNZ. She is also a part of the editorial team for the RWA’s monthly newsletter, Hearts Talk.”