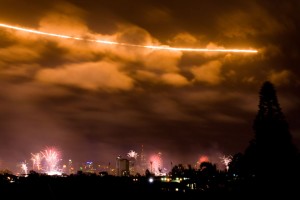 Photo courtesy of the ABC

Last Saturday night we joined the stream of people heading to the Southbank parklands under an overcast and threatening sky. A chill wind curled in off the river swirling the smells of cooking through the crowd. For those that had been camped out since lunch time the relay run to facilities was turning into a battle.  It’s been a long time since I found myself in the middle of that sized crowd, but thankfully most people were good humoured about the inconveniences.

For me the highlight was always going to be the swan song of the F111s. I don’t think there’s a more beautiful fighter aircraft. With their elegant swept wing and sleek lines, the F111s always makes me think of a beautiful brunette effortlessly gliding by. Of course, the reality of the pounding assault of their engines is a little different to that…. Even with the apocalyptic blaze of fire as they dump and burn I can’t help but admire their shear beauty.

It was a sad moment as the final run lit up the smokey sky. Easy to forget the F111s are lethal killing machines and not just some special effect platform for the crowds’ entertainment.

Oh, and of course, the fireworks were spectacular 🙂