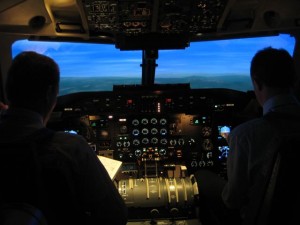 For those of you in aviation the photos in this blog will be very familiar (and not always in a happy way…) To those of you who don’t fly this is glimpse into a full flight simulator where pilots are trained and then checked on a regular basis – in our case every three months.

For all intents and purposes, when we are sitting in the drivers’ seats at the front, we are in a real aircraft. If the exercise is a night time one and we emerge from the sim building to blinding sunlight at midday it can be a little disorienting…

The simulators are amazing tools for training. We can simulate just about every failure that can occur in a real aircraft and allow the crews to manage it in real-time with a range of possible resolutions.

The instructor uses touch screens to manipulate those outcomes by programming the simulator. We can build violent weather patterns, including severe 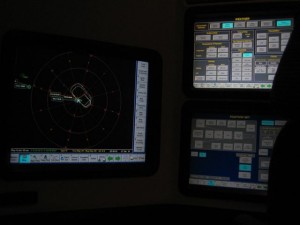 icing, turbulence and thunderstorms. Flocks of birds can appear out of nowhere, windshear can be programmed for take-off and landing. We can fail engines, hydraulic and electrical systems and collapse the undercarriage on landing.

As check captains, we  not only drive the simulator, but role play as Air Traffic Control, Cabin Crew, Fire Commander and, occasionally, other pilots in aircraft in close proximity. (Having a good imagination can be an asset!)

There are banks of computers, housed in giant lockers, driving the whole unit which looks like a box on stilts. The photo here is not quite the same as the one I drive, but it is similar. Microsoft is the main provider of this type of software. As an Apple fan I only wish Steve Jobs had been consulted. There is nothing as complicated as 12 PCs trying to talk to each other in a meaningful way. The solution to most problems in the sim is a reboot… surprise, surprise…

On a typical day we start with a one hour briefing on the session we’re about to conduct. Our pilots are expected to have a good understanding of the aircraft systems and what to expect when something goes wrong. They also need to know Standard Operating Procedures, which are set ways of doing the tasks in a flight deck, enabling crews who’ve never met before to safely operate an aircraft together. We then spend four hours flying which will include a sector from one airfield to another as well as exercises based locally practising take-offs, landings and emergencies. There are strict requirements that every crew has to meet and there’s the opportunity to retrain if things aren’t perfect. It can be very challenging 😉

If you are a nervous flyer (and a surprisingly large number of people are) next time you’re flying around our beautiful country take some comfort in knowing the professionals up the pointy end have been checked and tested to a high standard for their entire aviation career!

This has been my world for the last three years, shuttling between Cairns and Sydney, living out of a hotel room and wondering what time of day it really was. Mid-December I’ll be undertaking training myself to move to the Dash 8 400. I’ll miss the satisfaction of helping crews achieve their potential, but I’m looking forward to spending more time in an aircraft and being home!