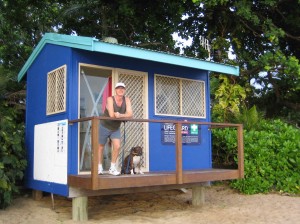 The 'boys' and the Trinity Beach Lifesaving Hut

Life is settling down again after Yasi. Think I may even have a slight hang-over this morning from drinking too much champagne with friends last night to celebrate being alive and well… (Oh and Chinese New Year – I’m a rabbit so this is MY year!)

For me this cyclone has been a very different experience to previous ones. This time we didn’t lose power or phones or internet and we were connected to the world in a way we never have been before.

Wednesday morning, as the storm was gathering momentum, my brother emailed me to say he’d recommended me to an ABC journalist. As I waited to go to air with Angela Owens from mid-western NSW I could hear the weather report for Orange. It was going to be a hot steamy day there as well. It felt surreal.

My sister sent my contact details to the BBC and I found myself talking to people in Birmingham, Coventry and London as well as BBC World News. Each time I got a brief glimpse into another city’s day as I waited on the line to be interviewed.

A gentleman from The Melbourne Age, one of Australia’s most credible newspapers, emailed to ask if I’d do a piece for the Saturday edition. ‘Tell us what it’s really like from a writer’s perspective.’ I was flattered and terrified at the same time. What do I know about writing for a newspaper? (Here’s the link to the piece – they published it on-line as well as in the paper edition – The Age)

Later that night, as the storm raged around us, I was tweeting about the cyclone and seeing those tweets being retweeted by people in different countries. Text messages kept us in constant contact with friends in Cairns and the rest of Australia. (The most common one in Cairns was  ‘Power’s gone.’) The internet remained connected so we tracked the eye of the storm on the Bureau of Meteorology’s website, watching as the immense system roared in. At one stage the main ADSL service went down, but my mobile broadband still worked. We knew from those images where and when the worst of the weather was going to hit.

Face Book messages from the many friends and colleagues in Cairns kept us in touch with those we didn’t have phone contact with.

At 6 am, the morning after the Yasi, the texts started arriving and it was relatively easy to check on people. Since then I’ve had emails from local people who were overseas  and who followed the storm’s progress on my blog. Several found my site by accident and, for them, it was the only way of getting direct news on the situation in Trinity Beach.

I know none of this helped the people who’ve had their homes and livelihoods destroyed by Yasi but, for those watching from the sidelines, the media in all it’s guises provided a unique insight and up to date information. I’ve always been a traditional media kind of girl – give me a good newspaper and a cup of coffee and I’m a happy little vegemite – but after Yasi I’m a convert to new media.