The following interview took place before Shattered Sky was written so this is a glimpse into Lauren’s world before she had a run in with the Nemesis Out-Lawed Motorcycle Gang. I’m hoping to catch up with her again soon to chat to her about her latest story. 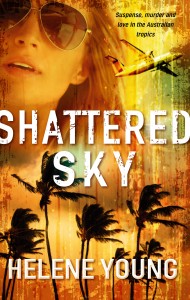 Lauren, thanks so much for standing in at the last minute when Morgan was called into work. Sorry you didn’t have time to prepare for the interview.

That’s ok, Helene. I’m always happy to fill Morgan’s shoes, though of course she does lack a certain style in the foot-wear department.

Substance more than style, Lauren. She’s probably got a third of the number of shoes you have.

Yeah, well, she needs to get out more and embrace her shopping gene. But I’m digressing. What would you like to ask me?

I’m interested in why you took up flying as a career. Is there another pilot in your family?

God, no. I’m the only one crazy enough to want to fly aircraft. I think it all started the day I saw an aircraft land on the beach. I’m not sure how old I was, but Dad could still carry me on his shoulders. I realise now it was making an emergency landing, but at the time there was just this lovely white aircraft drifting in on the wind and skimming along the sand spraying water into the air from its wheels as it touched down. It was magic! From there I was hooked. Of course my obsession with being Wonder Woman probably helped as well.

Wonder Woman, huh? Why am I not surprised. What path did you take in aviation?

I started flying as soon as I turned fifteen. Mum used to pay me to do ironing so I started canvassing her friends as well and spent hours putting the creases in shirts and pants. I think they all took pity on me, but it paid for a flying lesson a month until I finished school. By then Mum and Dad had decided I was serious about flying so they worked out a loan for me so I could do a full time Aviation Degree. I think the ironing helped develop my eye for fashion as well. There were some truly horrible clothes I ironed along with some gorgeous stuff.

I’ve heard of waitressing and pulling beers to pay for flying, but you’d be the first who’s pressed her way to a licence. Suits your style, Lauren. What was your first job?

It was awesome. The Stanbroke Pastoral Company hired me to fly one of their Cessna 206 aircraft on their gulf stations in North Queensland. It was a fantastic way to see the country. I met such amazing people working on those properties. Bloody hard work, mind you, and a bit of a culture shock for a city chick, but I loved the outback. And it was a great training ground for me.

From there you went to work for Border Watch?

Yeah, I did a stint with a charter company in Cairns, who shall remain nameless, building up twin time. It made the station work look like a picnic, but I shouldn’t complain as I accrued heaps of hours very quickly. That gave me the right qualifications to get my foot in the door with Border Watch. I love my job. I couldn’t ask for anything more. Someone pays me to look out at the amazing landscape, do my bit to keep the country safe, and lets me fly state of the art equipment.

What about airlines? Do you want to go down that road?

No. It’s not for me. Aviation is so diverse and people assume that everyone aspires to fly a 747 or an A380. They’re wrong. There’s no way I want to be flying a twelve hour sector then spending a night in a hotel room before turning round and doing it all again. Good luck to those that love it, but it’s not my cup of tea, thanks. I like unpredictable, I love low level, and I really like being part of a small team. Call me a big fish in a small pond, but that suits me.

Do you have any role models or mentors?

Morgan obviously has been an enormous influence. She’s steady. Nothing flusters her, except maybe Rafe. She also taught me patience. I’ve always been a bit on the impetuous side. ‘Sit on your hands’ she used to say to me during my training. I saw that in action the day we were shot down. She made it look routine. Just another day in the simulator. She was amazing.

How do you think that day changed you?

We can move on if you like. I don’t want to offend you at all after what you went through.

No, no. It’s a good question, it’s relevant. That day made me feel as though I’d finally grown up. My childhood, my golden teenage years were literally sloughed off me. Kind of like a snake shedding its skin, I guess. I’d had such a charmed life. Great friends, fantastic family. Sure I’d worked hard to get where I was in aviation, but compared with many I’d had a dream run. Now suddenly everything had changed. Gavin, who I’d taken so for granted, was never going to tease me again. I wasn’t brave enough to save him. It still hurts. Maybe it always will. But with Morgan’s help, and Rafe’s, I realised I had only one option and that was to go forward. It did make me reassess some of my more self-indulgent habits. It made me appreciate what I have still.

Is that when you started working with the Outreach vans feeding homeless people at night?

Yeah. It was time to give some of that golden life back to people who’d had very different childhoods to me.Outreach have a wonderful team who work so hard. Some of those amazing people have become close friends now. I just wish there was more being done for homeless kids. It’s tough on the streets and not very safe.

‘So where to from here?’

More of the same for me. I’m looking forward to summer. I’ve just finished my command up-grade to be a Captain and I’m loving sitting in the left-hand seat. Still a little daunted on occasions, but don’t tell the guys that! Morgan’s now a training Captain and I think I’d like to go down that route as well one day. Of course, first I have to master the art of being a captain.

Thanks for chatting to us, Lauren.  All the best with your career.

Hey thanks for interviewing me even if I was second choice behind Morgan. I don’t mind being her understudy!

You can of course find Lauren in Shattered Sky, available at all good booksellers, on line with Booktopia and available as an e-book with iTunes at the iBook store.