Today I welcome Lily to my blog. Her story, as told by Phillipa Fioretti in THE BOOK OF LOVE, took me on a journey through Antiquarian Bookshops and the streets of Rome. All the while I battled to contain my vintage frock envy… She re-introduced me to the delights of jam and toast (I’d fallen into the vegemite habit), and William’s poetry reading made me sigh with delight.

She’s taken time out of her busy life to talk to me so here’s her interview. I hope you enjoy it. 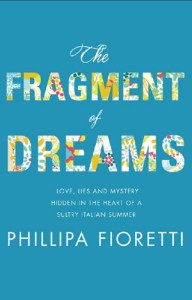 Welcome Lily, I loved your adventure in THE BOOK OF LOVE and I’m looking forward to more in THE FRAGMENT OF DREAMS. Where did your love of antiquarian books begin? Was it something you shared with your mother?

Not really. Mum loved her garden and she preferred to dig out weeds than sit and look at old books. When I went to uni I studied English Literature and I used to go hunting for interesting editions of the books we were studying. I fell in love with antiquarian books during those years and often found myself browsing through some old book of maps or recipes when I should have been writing essays.

It must have been a terrible struggle to deal with the grief of losing your mother. How did you find the strength to claw your way back from that dark place and to kick your morphine addiction?

What turned it around in the end was a counselor asking me what my mother would think if she was alive to see me addicted to her morphine. I’d thought of that a thousand times before and I knew Mum would have been devastated. But there was something in that counselor’s voice – I can’t pin-point it – but finally I felt that devastation, Mum’s and mine, and I knew it was time to get better.

Food, especially jam, seems to be a comfort in your life.  Can you share some of your favourite dishes or jam varieties? Are they linked to special occasions in your life or is it all about texture and taste?

Everything about jam is about comfort. Making it is so soothing, bottling it so satisfying and spreading it on toast and eating it is so simple but delicious. I like pastries and gelato, but jam is homely. Jam is the old IXL can my Papi had in his kitchen. Jam is a Victorian pudding in a nursery. Jam is scones and tea. And jam is sweet, let’s not forget that.

And delicious on a wintery day spread thick on a door-stop of bread!

What is it you love most about vintage clothing? Do you have a favourite vintage designer?

I like to imagine the woman who first bought the dress, what she wore with it and where she wore it. It’s like acting; I’m taking on someone else’s story. I like beaded vintage most of all, so any designer who used beads as trim is my favourite. There’s something elemental about shiny adornment and I can’t help but be drawn to it. It’s like the beads are crooning to me, hypnotizing me. Robbie never understood their allure; he was always cross about crunching a stray bead underfoot in the bedroom or somewhere. William just ignores the crunch, he’s probably thinking about something else. That’s the thing about beaded dresses; you have to be prepared for natural bead attrition.

Poetry is something that helped bring you and William together. What is it about poems that attract you? Who’s your favourite poet?

When I asked William for a poem I was very surprised he didn’t know any. He may well have known a poem but was trying to be all controlled and professional at the time, although he swears that he never paid any attention to poetry until I asked him. He writes it now. Agonising. Not the poetry but the process. He gets very intense and wanders about all distracted and feverish until it’s done. Likes to re-read it aloud in the bath before he reads it to me. He’s my favourite poet.

So romantic and so beautiful.

Your plans to move to Rome must be well underway. What are you looking forward to most about the move? 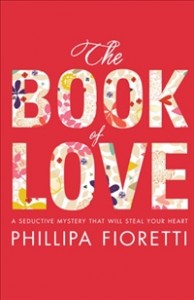 To William and I finally being together and having a quiet life.  If there is ever even a whisper about stolen art I’m locking William in the bathroom until it all blows over. I couldn’t bear him to get all heroic and dash off again. I’ll pass buttered toast to him under the bathroom door, he can drink tap water and I’ll be on the other side of the door reading aloud so he won’t get bored. Crime and Punishment by Dostoyevsky probably, although I haven’t sorted out the details yet.

Hmmm. I hope the toast has some jam on it as well… How do you think Otto will react to cobbled streets Italian cats? Have you learnt Italian yet?

Otto can’t tolerate cats. They know it too and the sneering looks from the cats of Paddington drive him into a rage. He’s like a school headmaster whose pupils snigger behind his back. So he’s going to have to work on his feline issues. I imagine Roman cats will be far more streetwise and contemptuous than the cats he’s used to, so if the old tabby, Dithers, from across the lane gives him grief goodness knows what a gang of Italian toughs will do to his dignity.

Perhaps you’ll need to find him a street-wise friend who speaks the lingo!

I’m looking forward to The Fragment of Dreams. Can you give a sneak preview of that story?

My sister Poppy who lives far away on a cattle station, came here for a visit and she had a letter from a woman we’d never heard of which mentioned how our father died  –  and it was not the same story Mum told us. So Poppy, who gets a bee in her bonnet about these things, tried to track down the woman and found an uncle and a cousin, both of whom we’d never met before. William, Poppy and I went to visit them and while we were there William noticed a fragment from an ancient Roman tomb being used as a garden stone in our uncle’s garden.

Well, that was the start of it. He had to go back to Rome a few days later and our nutty cousin turned up at the airport accusing William of murder and theft – because the fragment had been stolen and our uncle poisoned. Everything just fell apart then, William had to go and get on the plane and I was left with Poppy and these people, these family members I’d never even heard of until a week before. The police had been called and it just went from bad to worse. Everyone suspected William.

Poppy had no idea what she unleashed when she waved that letter around. I don’t blame her, but we all suffered. Everyone who saw that wretched fragment suffered. There’s a lot I can’t talk about, but I ended up going to Naples on my own to find out the truth about Dad and Mum, about William and, I suppose, about what I’m capable of.

I’d do it again if I had to, but it won’t happen again because William will be behind a locked bathroom door counting tiles and writing haiku while someone else sorts it all out.

What a stirling idea, Lily. Now I know you need to rush off and attend to your launch details so thanks again for sparing me some time.  I look forward to curling up with your new story and a pile of toast and jam! 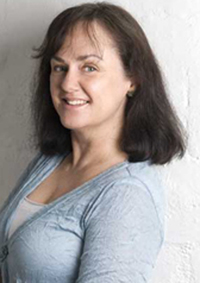 You’ll find THE FRAGMENT OF DREAMS in all good bookstores and on-line at iBook by iTunes (and yes you can read that on your favourite ereader – you don’t need an iPad!)

If you’re in Sydney, Phillipa is presenting workshops at the Sydney Writers Festival on Monday 16 May and Tuesday 17 May.

One thought on “A Fragment of Lily”