Today my guest on the blog is fellow Australian Suspense writer, Sandy Curtis. With six books out on the shelves she’s a seasoned writer who’s captured an audience of crime lovers who appreciate a love story as well. Here’s our conversation. Hope you enjoy it.

Sandy, it was lovely to catch up with you and Bronwyn Parry at the SheKilda Sisters In Crime convention in Melbourne. What a fabulous weekend which provoked spirited blog debates about gender bias in the literary world for weeks afterwards.  I followed the trail from Tara Moss to Elizabeth Lheude to Dianna Blacklock’s blogs, as I’m sure you did. Where do books like yours, with a strong suspense plot and a believable love story, fit in the genre world? Are your readers men or women? Do you write with one or other audience in mind?

Books like mine bounce around inside the genre mould according to the beliefs of the readers, and more often, reviewers. In the USA, romantic suspense has a huge following but Australian bookstores have trouble slotting them into the ‘fixed’ genre slots of romance or crime.

My books (Dance with the Devil in particular) started off as romantic suspense, but have been evolving into crime with a life-changing love story adding an extra and revealing depth to the characters.

Women are my main readers but I have been pleasantly surprised at the number of men who enjoy my books. I think it might be that the male readers can see themselves as the hero and can relate to the problems he has to overcome. Or perhaps they enjoy the action … and the hot sex 😉

I don’t write with either audience in mind. The story presents itself in my mind and the characters take over and find their own destiny. Sometimes they surprise me. Sometimes the minor characters can become very demanding and I have to give them their own book J

Book stores do seem to struggle with where to put us… I’ve found Bron Parry’s books in the crime section yet in the same bookseller Judy Nunn’s books could be found in Australiana. 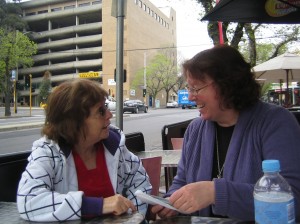 Sandy and Bron plotting at SheKilda

What led you to write Romantic Suspense/Thriller stories?

I grew up reading Alistair MacLean and other adventure writers’ books but I always felt the female characters were not given a chance to shine. In some of the books they were actually killed off to give added impetus to the hero to get the bad guys.

For a girl who was all tomboy and resisted all attempts to dress her in frills and laces, this annoyed the hell out of me (when I look back at my childhood I think I had quite a lot of hell in me that was bubbling to get out). I also had four brothers who were allowed far more freedom than I was, so seeing women in books treated so dismally (okay, I knew it was fiction) fuelled my need to prove myself equal to my brothers. My teenage writing attempts were evidence of that.

In 1996 I began writing romance after reading an article which, in essence, said a new writer would find it easier to get published in that genre. My first attempt achieved a place in the top 20 of the Emma Darcy Award for full-length unpublished manuscripts run by Romance Writers of Australia, and the following year my next manuscript came second out of 80+ entries.

Trouble was, I kept putting way too much plot and action into my stories, which took them out of the category romance genre. But I had to follow what my inner storyteller needed to do, and so Dance with the Devil was born. How it found a publishing home is another story, and rather complex, but I knew that at last I had discovered what I wanted to write – a suspense thriller with a life-changing love story.

Sandy, I’m beginning to think we had very similar childhoods and then a similar journey through the Emma Darcy award. We  caught up at this year’s Romance Writers of Australia conference earlier – another wonderful affirming weekend filled with enthusiastic writers. How long have you been involved with that organization and how has it impacted on your writing?

At my first conference in 1996, RWA members swept me away with their generosity and warmth, and have continued to do so. It’s an organisation that goes from strength to strength and its secret, as far as I’m concerned, is that they live what they write – love, and all the wonderful emotions that go with it.

I’ve learned a lot about writing from going to their workshops and conferences, and even more from the wonderful friends I’ve made.

Having two of my books become finalists in the mainstream section of the Romantic book of the Year Awards that RWA runs has been so encouraging. Knowing readers love my stories makes all the hard work worthwhile.

You have a vibrant group of writers in Bundaberg and once a year you run WriteFest. How did that start, how does it work and where is it heading?

For four years I was president of the Bundaberg Writers’ Club and when we ran an Open Day to show non-members what we were all about we had such a good response that I suggested we should run a day of workshops for writers, and so WriteFest was born.

We usually have four workshops running concurrently in the morning, a brief industry Q&A panel with all the workshop presenters, then four workshops in the afternoon. The presenters are industry professionals from all areas – authors, forensic scientists, criminal psychologists, etc.

For the past five years we have also had agents or editors conduct interviews with aspiring writers based on their synopsis and manuscript submission, and four of those writers have had their manuscripts published as a result.

Getting funds to run the event has always been my biggest headache, and I’d love to have a permanent corporate sponsor come on board. So if you know one …

Where is it headed? Hopefully to becoming an even bigger part of the cultural landscape of our region, and contributing to more writers becoming published.

It sounds like a wonderful regional festival. Look forward to many more Writefests!

What’s your writing routine? (Ok, that is a loaded question…)

Routine? Writers have a routine? I’ve heard about that but thought it was an urban myth, like the severed hand on the car roof. Once I had something resembling a routine – running my home office services business in the day and writing at night, but nearly six years ago we moved to the coast and the chaos which had always hovered in my life descended with a wallop.

Our house was supposed to be finished being built a month before the second WriteFest but due to delays we moved in the day before. Two of the presenters, who were also our friends, were staying with us, and when I picked them up from the airport I told them they had a bed and a towel. You know those jokes that end “And that’s when the fight started …”? Well, that was “And that’s when the chaos started …” Six years later it appears to be escalating.

So now I let the Chaos Fairy have her wicked way in the day time and write in the peace and quiet of night.

May your Chaos Fairy leave you in peace so you can write!

Your latest book, Fatal Flaw, is published by Clan Destine Press, a new Australian boutique publisher run by the dynamic Lindy Cameron.  How did you find the publishing process with a smaller company than the larger publishers you’ve worked with previously?

With both Clan Destine Press and Pan Macmillan I’ve been lucky to have had warm and friendly publishers who are receptive to an author’s input, and great editors. The biggest difference is that a big publishing company has a lot of clout when it comes to distribution, something that is more challenging for a smaller one, but readers can order my print books either through their local bookstore or the Clan Destine Press website, and my previous books are now available as ebooks.

Smaller publishers don’t have to answer to so many other sections of the company and so are able to make quick decisions. Lindy Cameron at Clan Destine Press wrought a minor miracle and Fatal Flaw hit the book shelves 13 weeks after I’d submitted the synopsis and three chapters to her. That would have been almost impossible with a bigger publisher.

That’s impressive, Sandy. I know Aussie publishers are quicker than their USA and UK counterparts and they turn a manuscript around in eight to twelve months.  13 weeks is phenomenal.

What’s the next project you’re working on?

Grievous Harm, the follow-on book from Fatal Flaw. All my books are complete in themselves, but a minor character from one book becomes the major character in the next book, and I’m wondering how many readers of Fatal Flaw will guess whose story will feature in Grievous Harm.

I’m also writing the next manuscript after Murder, Mayhem and Menopause, a story that might be classified as women’s fiction with a criminal difference 😉  And looking for a publishing home for MM&M.

What advice do you have for emerging writers?

Be determined. Believe in yourself and your writing and don’t give up. A lot of very good writers have never been published because they gave up when the going got tough. It’s a tough industry, so writers have to be tougher still.

Go to writing workshops and learn your craft and learn about the industry. Join writing organisations. Make sure your manuscript is the best it can be before submitting it – correct formatting, no spelling or grammar errors, and appropriate genre for the publisher.

Sandy, thanks for chatting today. I’m very excited about your latest book  and am looking forward to reading it. It’s great to be on a  webpage with you and Bronwyn Parry and I hope we can continue to educate readers and booksellers on Romantic Suspense Australian style!! Look out for our Christmas give away on the Australian Romance Readers Association website during December. A three book pack – one each from Sandy, Bronwyn Parry and myself  – will be up for grabs.

Sandy Curtis is the author of five novels which have been nominated in the Ned Kelly Crime Awards, and two have been finalists in the mainstream section of the Romantic Book of the Year Award run by the Romance Writers of Australia. Her sixth book, Fatal Flaw, is published by Clan Destine Press.

Find Sandy, Bron Parry and me at www.australianromanticsuspense.com

Sandy’s books are available at http://clandestinepress.com.au