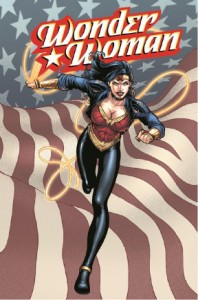 The ABC is reporting this morning that Wonder Woman’s had a make-over. She’s been getting around in the same weird blue pants and shape-shifting bustier for 69 years, so she does indeed deserves a little fashion moment of her own.

Complete with dark leggings and a sexy leather jacket, she looks more like a vampire-slaying avenger than the all-American sweetheart super-hero she was in 1941. Ok, I think the spurs on her heel may be surplus to requirements, but what would I know.  At least she’s finally been given a top that’s a touch more practical…

Along with the make-over she’s being given more intellect, more resolve, more depth. (She’s going to need them for the current crop of high tech villains!) So I say ‘yay’ to the makeover. Heroines in today’s books aren’t just pretty sidekicks to their alpha male counterparts.  They’re every bit as lethal and more than capable of saving the world in their own right.

Go kick some arse with those black boots, girl!!

2 thoughts on “Wonder Woman gets a make-over”