Following on from a blog post earlier this week, Bron sent me a photo of the three storey castle in the fish tank Wolfie’s goldfish call home. Try as I might I couldn’t upload it into the original post, but I was so impressed I decided it needed a post of its own.

Being more of a ‘dog’ person, I’m intrigued by her obvious attachment to the little fellas 🙂

So courtesy of Bron, (The Platy she’s referring to is Sandy’s fish, so you can see there are more of these fish fanciers out there!) here’s the photo and story! 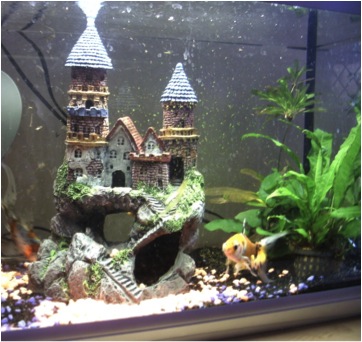 Here is a picture of the three-storey castle in the fish tank so you can show Platy what it looks like.  We considered shipwrecks and crumbling Greek temples but wanted something inspirational for the little darlings so settled on this Disney-style construction instead.  (In fact the Disneyland castle is supposed to have been inspired by the medieval town of Carcassonne which is more or less just up the road.  It was restored in the nineteenth century and is now World Heritage Listed even if those cute little upside-down ice-cream cones on the top of the towers were not an original design feature … but I’m guessing  Platy doesn’t worry too much about whether things are to scale?) Anyway she may like to know that the dark orange flash in the bottom, left-hand corner of the picture  is the aquarium bully.  When he gets out of line the Hand of God descends and knocks smartly on the glass.  Its the same hand that removed our only fatality …  and the big bully scoots behind the plants and hides …

Ouch is all I’m going to say…. Helene xx

18 thoughts on “Disney Downunder – (This is for Sandy and other fish lovers :-)”