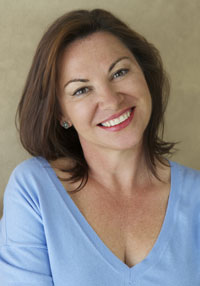 This year my To Be Read pile is already topping out at fifteen books and that’s before they’ve even been released. The first cab off the rank for 2012 is Lisa Heidke’s new book, STELLA MAKES GOOD. Lisa’s stopped by today for a chat. Enjoy!

Lisa, congratulations! With the release of STELLA you now have four books on the shelf, which is a wonderful achievement. When you wrote your first book where did you see your writing career heading?

When I wrote my first book I was just hoping I’d have another idea that could stretch for 85,000 words. It’s a bit daunting finishing one manuscript and then asking yourself, where to from here?

I would like to think I’ll continue coming up with plot lines that people will be interested in reading.

Lol, Lisa, I don’t doubt that you will and I look forward to reading more from you. What has been a memorable high point of your writing career so far?

Definitely seeing my first book, Lucy Springer Gets Even, in bookshops. It was a thrill I’ll never forget.

Now when I go in to Dymocks and see my four books lined up, I wish I could travel back in time ten years and tell my younger self to relax, enjoy the moment and keep writing.

Contrast that with a low point – if you’ve had any, of course!

My low points coincide with bouts of low-esteem when I truly believe I won’t be able to come up with an idea big enough to sustain an entire book. Then there are the times when I’m about 40,000 into a new novel and I’ll stare at the computer and think to myself, ‘What happens next? Where can I take this story?’ If I’m not feeling confident, I tend to panic.

Another inevitable low point is when I get a review that’s less than stunning. It doesn’t happen too often but when it does, it’s heartbreaking for a couple of days. I just have to accept that not everyone is going to love my books or my writing style.

Each book has explored a different theme and can I say they have got a little more edgy with each subsequent story. Stella’s story delves into sex parties. (I can’t wait to read it J)How hard was it to convince your publisher that the story would resonate with your readers?  What compromises did you have to make, if any?

My publisher didn’t have a problem with me writing about the repercussions of a night out at a sex party but…she didn’t want the party mentioned on the back cover blurb for fear of turning readers off. However, those readers are going to come across it quickly (Page 16). The book goes for over 300 pages.

What else? A couple of my sex scenes had to be pulled back a little but in the main, I was given a free rein to explore the darker side of suburban life!

Good to hear your publisher was completely supportive of your writing.

Your stories have been categorized as ‘Chicklit.’ How do you feel about that tag? Where do you see your books fitting? I see them more as stories for women, by a woman and dealing with women’s issues, but I guess the publishing industry likes to be able to pigeon-hole books into genres.

My publisher prefers to call my writing ‘contemporary women’s fiction’ and I guess it is. As you say, Helene, I write stories for women, dealing with women’s issues. My stories have moved on from Chick-lit which I tend to think of as focusing on women in their 20’s searching for their place in the world.

I write mostly about women in their 30’s triumphing over adversity – be it career slumps, marital infidelity and breakdown, stress with teenagers, aging parents…stumbling upon suburban sex parties…

I really don’t mind what people call my books as long as they read and enjoy them.

And enjoy them they will!! I know there has been spirited debate in the last six months about the place of women writers and ‘women’s fiction’ in the literary world and whether women writers achieve the recognition they should. I think unfortunately the stats speak for themselves so how do you think that bias carries over into contemporary fiction?

An interesting question would be why do we even have to call it ‘women’s fiction’? Do we call Nick Earls books ‘men’s fiction’? I don’t think we do. Occasionally, it’s called lad-lit, but generally his books are just called fiction and he gets a lot of print reviews and media coverage, mostly positive. Would he get as much attention if his name was Nicola Earls?

Maybe publishers don’t pigeon hole male writers because there’s perceived to be less of it written…or it’s classified as action or adventure …or just fiction but never men’s fiction or romance…Not many men would say to their friends, ‘hey I read a great romance last night.

I know several women crime writers who use their initials rather than their names so that the perceived bias is lessened. The Australian Women Writers Reading Challenge has been set up in an attempt to broaden the profile of women writers. I’ve already discovered new writers and I’m looking forward to reading more. (The challenge also has a group on Goodreads which is very active.)

Lisa, what’s the best piece of advice you’ve been given in your writing career to date?

Probably the best piece of advice I was given was by Peter Bishop, who was the Creative Director at Varuna for a number of years. He told me to keep writing. He said finish the first draft of one manuscript, put it away for three months and start working on a new one straight away. He said that it took most ‘overnight successes’ ten years to get published and that I should aim for that because by then I’d have at least a couple of manuscripts to submit to publishers.

It took me almost eight years of writing before I got a contract with Allen & Unwin and by that stage I had three manuscripts to show them – all of which have subsequently been published.

Peter Bishop gave me similar advice and he was spot on.

Excellent question…remember my earlier answer about the fear of not being able to come up with a new idea? That’s where I’m at right now. I’m tossing a few ideas around, but so far a plot line that I’m confident about sustaining has alluded me! EEK!

Ha, I’m sure there are plenty of ideas bubbling around in your head, Lisa, and every one of them is sustainable! Enjoy the release of STELLA MAKES GOOD and thanks for dropping by for a chat.

Lisa Heidke writes contemporary women’s fiction. Lucy Springer Gets Even (Allen & Unwin, 2009), her first book, was quickly followed by What Kate Did Next (2010). Claudia’s Big Break, was published in January 2011 and in February, was listed in the Sydney Morning Herald as one of the Top Ten Australian Best Sellers.

Lisa’s fourth novel, Stella Does Good, has just been released in January 2012.

You can find out more about Lisa and read her sporadic weekly blog, at www.lisaheidke.com 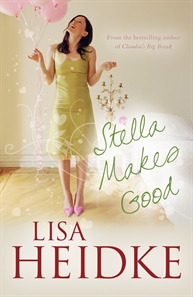 Can mother-of-two, Stella forge a new life for herself after the end of her marriage? A funny and insightful novel about love, friendship and the quest for happiness. Stella Sparks is on good terms with her ex-husband, Terry, despite the fact he left her for another woman. Stella’s philosophical – the marriage had run it’s course, they remain friends and the well-being of their kids is central to both of them.

Stella’s life takes a distinctly upward turn when she meets a handsome, apparently single – no ring, anyway – father at her son’s school speech night. For Carly and Jesse, however, the search for happiness and fulfilment proves more elusive…
With a healthy dose of humour and romance Stella Makes Good is about the games we play, the secrets we keep, the unpredictable nature of life and the importance of female friendship.

Stella’s two closest friends, Carly and Jesse, envy her togetherness and wish they could emulate it. Jesse’s husband, Steve, is a control freak who’s driving her crazy, but she has two small children and can’t see a way out. Carly, meanwhile, suspects her husband is having an affair and isn’t sure what to do about it.

And if you need more to convince you, here’s a little teaser!!