Today’s blog guest is multi-published author, Beverley Eikli, who shares her writing life with her alter ego, Berverley Oakley. Beverley was the inaugural winner of Search for an Australian Star run by UK publisher, Choc Lit.

Hope you enjoy our chat! 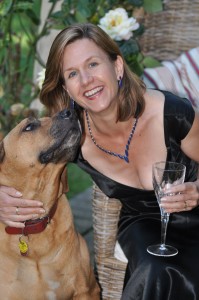 Beverley, welcome to my blog. Congrats on your recent win. That’s a wonderful achievement. You’ve already established a following as Beverley Eikli, and now you’re writing more sensual stories as Beverley Oakley.  What prompted that move to a pen name and a higher level of eroticism in your stories? How do you juggle to the two personas?

Hi Helene, thanks so much for inviting me here. What prompted the change? Well, my life has been ruled by aviation for the past 20 years (which is partly why I enjoy your books so much). I’ve been the typical trailing spouse of a pilot who fortunately was handsome and exciting enough to make the gypsy life worthwhile. Mind you, before our two daughters were born I spent thousands of hours working the computer equipment in low flying CASA 212s and Cessna 404s on contracts around the world. I’m not used to doing the same thing for long, or living in the same country or city  for more than a couple of years and, in my writing, I guess I needed to do something different from the traditional Regencies (albeit with lots of adventure or intrigue) I’d been writing.

I also had a heroine who was just too saucy for my English publisher. That was Fanny Brightwell, the debutante in my ARRA-shortlisted racy Regency romp, Rake’s Honour. Fanny had to take a lot of risks to avoid marriage to a lecherous, gout-ridden dilettante. Too many risks, which is why I had to find a new publisher for her exploitsJ

Love the idea of a racy heroine! Your latest release ‘SAVING GRACE’ is a novella set in the era of where photography is in its infancy. What a 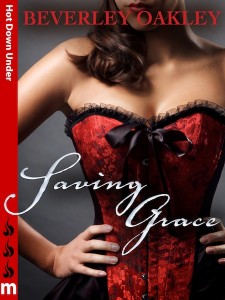 fascinating concept! Where did your passion for this era start? How did you go about researching the subject?

I’ve been a history buff since I was twelve so the research for the period between 1750 and 1900 is ingrained. It’s easy to plot stories upon a background that is already so familiar. I used to lament that I’d been born in the wrong century … which is a bit rich considering I’d never have been able to enjoy so many of the adventures I have in this more liberated (for women) age.

Lol, I know what you mean. Be grateful we’re in the century we are but…

Your heroine, Grace, is a prostitute. How did you write her character to ensure readers were empathetic to her?  (Love the idea of a woman wronged who can turn that into strength!)

Saving Grace was a very emotional book for me to write. I certainly enjoy historicals with feisty heroines but I think the reality for most women pre the vote and decent wages was that they were utterly powerless to direct their own lives – unless they were cunning about it, for they certainly didn’t have the legal and financial resources we take for granted. A ‘reputation’ was everything and if a woman didn’t have that, usually the only way to stave off starvation was usually on her back. So when my heroine, Grace, a very moral, decent young woman, is dismissed from her job as a housemaid, she ultimately has two choices: starve or make money from prostitution. Grace’s story starts when she’s already been a prostitute for three years and she discovers that her next (somewhat unwilling) client is the young man she once loved and whom she believes responsible for plunging her into this hated way of life.

It’s a wonderful premise, Beverley and I’m looking forward to reading it!

Congrats on winning the Choc Lit Search for an Australian Star Competition.  That’s a wonderful achievement. Can you share a sneak peak into ‘The Reluctant Bride’, which will be released in March, 2013?

Oh my goodness but this book has a long history. It won a Single Title (I forget which one but it might have been six or seven years ago.) Cindy Hwang from Berkley requested the full, so I wrote it as quickly as I could. In those days, though, I had a huge problem with my stories getting incredibly bogged down in intrigue and villainy from the midway point. Not surprisingly it was rejected, so I rewrote the second half, resubmitted all over the place and it was still rejected.

I then got published by Robert Hale, wrote three books for them (all winning Single Title entries, curiously enough) before returning to The Reluctant Bride (originally called The Reluctant Hero). With a couple of years’ distance I saw that it needed another total rewrite of the second half, but I had developed in the interim what I thought was a great plot idea. One that would weave the history of the heroine, into that of the hero.

Emily, my English heroine, has no idea of her true heritage. She’s reluctantly married Angus, a very noble, seemingly emotionally distant soldier who has returned from the Peninsular Wars. He’s the one who delivers to Emily the news that her betrothed has just been killed. Shortly afterwards Emily discovers she is pregnant to the man she was due to have married within the month and is pressured to marry Angus who’s been in love with her for years.

Angus is then sent on a mission to bring to justice a notorious French spy, Madame Fontenay, and as Emily’s familial associations are unraveled at the same as Angus’s own past returns to haunt him, the danger escalates. Trust, betrayal and loyalty are the major themes and, like my other books, it ends on a roller-coaster race for survival.

Anyway, fortunately for me, I had just polished the story to within an inch of its life when ARRA announced the Choc-Lit competition, so I entered. I was really lucky. And Choc-Lit are the most supportive, friendly and promo-savvy publisher. They won Publisher of the Year at last year’s Festival of Romance in the UK and their writers (14 of us, now, I think) have picked up a number of awards over the past couple of years. I’ve just been asked to sit on the Choc-Lit panel at the Romantic Times Convention in Kansas City in May.

The Reluctant Bride comes out in September, in paperback and e-book, followed six months later by my 1960s illegal diamond-buying romantic suspense set in the African mountain kingdom of Lesotho where I was born and where my dad prosecuted a number of medicine murder and illegal diamond buying cases in the 1950s and ‘60s.

A long road but a wonderful validation of your story. And wow! The next story sounds awesome – fabulous setting!!

I’m on final edits for my first erotic historical romance for Ellora’s Cave. It’s called Her Gilded Prison and it’s the start of a series about Viscount Partington and his legitimate family, and his three illegitimate children. The first is a very emotional story about the viscount’s unloved wife, Sybil, and the younger man whose help she elicits to save the estate. I’ve just finished the second story which is much racier, like Rake’s Honour, as it takes up the story of one of the daughters. I guess you could say the series is a bit like the popular television series Upstairs, Downstairs, though set 100 years earlier, and with sex, since it revolves around the determining the succession in a rather unusual way.

Thanks so much, Helene, for having me here today. I can’t wait to meet up with readers and fellow authors at ARRC in March and at the RT convention in Kansas City in May.

And thanks for being a guest today! I’m looking forward to ARRC13 as well – so many wonderful romance readers! 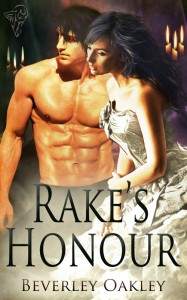 She’s been shortlisted twice for a Romance Readers of Australia Award in the Favourite Historical category — in 2011 for  A Little Deception, and in 2012 for her racy Regency Romp, Rake’s Honour, written under her Beverley Oakley pseudonym.

Beverley wrote her first romance when she was seventeen. However, drowning the heroine on the last page was, she discovered, not in the spirit of the genre so her romance-writing career ground to a halt and she became a journalist.

After throwing in her job on South Australia’s metropolitan daily The Advertiser to manage a luxury safari lodge in the Okavango Delta, in Botswana, Beverley discovered a new world of romance and adventure in a thatched cottage in the middle of a mopane forest with the handsome Norwegian bush pilot she met around a camp fire.

Eighteen years later, after exploring the world in the back of Cessna 404s and CASA 212s as an airborne geophysical survey operator during low-level sorties over the French Guyanese jungle and Greenland’s ice cap, Beverley is back in Australia living a more conventional life with her husband and two daughters in a pretty country town an hour north of Melbourne.