Today I have a special guest for you. Sandy Curtis is a writer from Bundaberg who paved the way for Australian Romantic Suspense stories. Her latest release is out on the shelves now and takes readers in a slightly different direction. 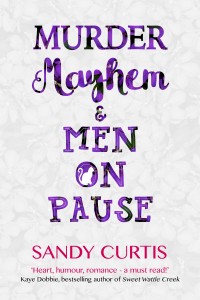 A bankrupt husband. A marriage on the rocks. A cop more sexy than the legal limit.

Just when Ellie Cummins is free to shed her corporate wife image, she finds the body of a young woman in an apartment she’s been hired to re-design. Her fledging business depends on this contract, so she tries to ignore the long-buried grief the trauma exposes.

When Ellie learns that her daughter has a personal connection to the victim, and the police have no leads, she and friends Cass and Kandy decide to investigate the murder. But Brisbane’s alleyways are dark and their detective skills dubious, so how far will they go for justice?

Kandy once lived a hard life on the streets, but will uncovering her husband’s secret life destroy all she’s achieved since then? And solid, dependable Cass isn’t as content with her life as she seems.

And is the cop who responded to their call more interested in Ellie than the investigation?

For the three friends, it’s a time of change and self-discovery. And the realisation that life, like love, doesn’t play fair.

Murder, Mayhem and Men On Pause sounds like my kind of story and I’m looking forward to reading it very soon. So over to Sandy to talk about the inspiration behind the story!

Thanks, Helene, for having me as a guest on your blog. I hope you are sailing with fair winds and blissful days.

Do we really see ourselves as others do?

That’s a question that came to my mind when writing Murder, Mayhem and Men On Pause. Ellie sees herself as a “corporate wife”, a role she feels she “morphed into” through trying to be the wife her husband wanted, but it’s not the person she thinks she is.

So is the outside what people really see? Do they really judge us on appearances? Unfortunately, it’s something all of us do at times. We look at people in the street or on television and slot them into labelled boxes. But if we look at our friends, do we ask ourselves how they see us? Usually not, because they are our friends.

I have a good friend who told me once that I should be her manager because she often gets people “off side”. When I first met her, I thought she didn’t like me, and I mean didn’t like me at all. But circumstances put us in close contact and over the years we have developed the kind of friendship where we can tell each other if we’re not on the right track (tactfully, because being friends doesn’t mean you are allowed to be rude).

Another good and long-standing friendship is with a woman who has been through some tough emotional times and we trust each other so much that we know our intimate thoughts are safe with each other. She also told me I have a terminal case of “nice”, which really made me smile.

It’s this depth of friendship that I called on when I wrote the characters of Ellie, Cass and Kandy and their relationship with each other.

Although there is a murder in the story (yes, the title is a giveaway of sorts), it’s not the focus, but the catalyst that enables the friends to face the changes that are thrust upon them.

And there is a love. The kind of real, warms-you-to-the-soles-of-your-feet love.

But friendship is paramount. Here is an excerpt from when Ellie’s husband Damien has just stormed out of the house after an argument:

“She stared out across the manicured lawn and felt as though each perfect blade of grass was laid like a fence post to trap her. Trap her in a prison she was struggling to escape from but didn’t know how to put the key in the lock. Or even where the lock was.

But she knew the key was within her grasp. Knew only she could use it.

The sound of the doorbell ringing zapped through her like an electric charge. She waited a moment for her heartbeat to slow, pulled her features into an expression she hoped approached normal, and went to the door.

‘Surprise! We’ve come to help you celebrate your first day on the job.’

Ellie stared. Cass and Kandy, hands full of Chinese takeaway containers and bottles of wine, grinned at her. Seconds passed. Their grins faded. Ellie realised she hadn’t moved, hadn’t allowed her mind to register there was someone – two someones – who cared about her and wanted the best for her. With a cry of joy and gratitude she threw her arms around them, squashing plastic and getting jabbed in the breast by a wine cork.

‘Well, that’s a lot better,’ Kandy joked. ‘I thought for a minute there we’d come to the wrong house. Is Damien home?’

Ellie disentangled herself and shook her head. Before, she’d wanted to cry. Now, she needed to vent, to rip away her facade of a happy marriage and face reality. Words spewed out like lava as she ushered Cass and Kandy into the rumpus room and took her best wine glasses from the bar cupboard. The flow of words didn’t stop until she’d gathered plates and cutlery and placed them on the coffee table next to where her friends were sitting.

Kandy took the lids off the containers and poured wine into the glasses. She handed a glass to Ellie. ‘So what are you going to do about it?’ “

So to all my readers, I wish you the kind of friendships that support you, sustain you and bring you joy. We’d love to hear your stories of how friendships have been a central point of your life.

Thanks, Sandy, love this post. Friendships are so important, especially for women, I think. I know I’m blessed to have a core group of friends who’ve been with me for a very long time. Whilst other friends come and go these women have been there through the highs and the lows and their friendships have never wavered. Priceless!!

Thanks for visiting, Sandy, I hope MURDER, MAYHEM AND MEN ON PAUSE flies off the shelves!

3 thoughts on “Murder, Mayhem and Men On Pause”