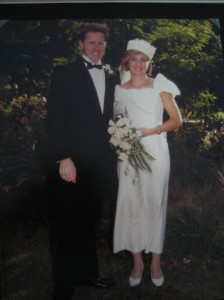 Yesterday was a very good day.

Started well when both GW and I remembered it was our 24th wedding anniversary – who could believe we looked so young when we married all those years ago…  Unfortunately we both had to work, so that put a tiny dampener on the day. Celebrations were very low key at 10 pm when I finally made it home from a dark and stormy night in the air.

The next big news was finding out BURNING LIES will be released on the 2nd July 2012. That means I can now start organising parties 🙂

The good news kept coming. Since I now have the benefit of two publishers I have twice the announcements to make! SHATTERED SKY was to be re-released as a B format but Hachette have recognised that the e-book market is storming ahead so instead they’ve reduced the price of SHATTERED SKY’s e-book to reflect that. You can now by WINGS OF FEAR and SHATTERED SKY, in most countries, as ebooks for $10.99 and $11.99 respectively. That means on your e-reader you can have the set for less than the price of one paperback book!

And the final thing for the day? I arrived at work to find I had an all female crew for the second time in a week 🙂 A very good news day indeed!