One of the delights of living in north Queensland is the laid back connections between people. It would feel wrong not to say g’day to my fellow walkers in the mornings and afternoons. The butcher leans on the counter and discusses the economy (and the lack of tourists) and I suspect he has a better grasp than many of our politicians.  The garbo waves hello, the bus driver will drop you off where ever you request. People look you in the face and smile.

All that open friendliness does mean that the exceptions stand out. At one end of our beach the houses nestle on the sand, palm trees shading their front porches, and passer-bys respect the inhabitants’ right to privacy even while they admire (and possibly envy) their position. 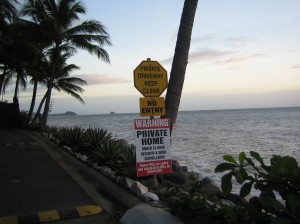 At the other end is a house that’s turned into a fortress. Its new owners installed electronic gates that look capable of withstanding a battering ram worthy of the orcs and maurauding hoards of Mordor.  Next came security cameras, signs warning people not to sit on their rock wall, signs warning of dogs, and signs warning of imminent prosecution if you disobeyed any of the above edicts. Not content with that they’ve now  increased the size of the rock wall that separates their property from the beach. If the unwary don’t obey the signs and perch on the rocks they’ll find themselves being told to move on as the police have been called.

It always makes me a little sad that this family moved to a house front and centre on a beach and then proceeded to lock themselves away, block out the world. Their view is diminished, and not just the view of the gorgeous Coral Sea. Their view of their community is surely as shuttered as the house and that’s sad because there’s so much joy to be had from simple contact with others in an uncomplicated way.