Kicking off  my guest blogs for 2013 is Rachael Johns. Congratulations to Rach for being shortlisted for the Australian Romance Readers Awards. It’s a wonderful accolade and richly deserved. Please make her very welcome as she shares some of her writing process.

Hi Helene – thank you so much for having me back on your fabulous blog. It’s one of my favourite spots to visit. HUGE congrats on your recent ARRA nomination too. I can’t wait to hang out with you at ARRC again soon J

I have two books out in January, MAN DROUGHT with Harlequin Australia and STAND-IN STAR with Carina Press. Both contemporary romances but set in totally different places – rural Western Australia and Hollywood respectively. It’s really fun and I think also good for me to write two different styles. Granted my genres are quite similar compared to some, but I like breaking up my writing with different focused books and I think it keeps my muse happy too.

It’s my Muse I’d like to chat about today. I’m one of those writers who falls closer to pantser (writing without too much of an pre-ordained outline) than plotter (writing with a clear idea, often already detailed in an outline, of where the story and characters will go). Although I often wish I was a bit more of a plotter, I love the surprises that come through my current writing process.

Take MAN DROUGHT for instance. When I started writing this book I had a pretty clear idea of my two main characters, Gibson and Imogen but I needed to create a bigger cast and have characters whom would force the hero and heroine to interact even though they would MUCH prefer not to.

So to Gibson I gave a grandfather who worked in the pub that Imogen bought. This meant that Gibson had a reason to go to the pub, thus seeing Imogen, when he would rather not. As the story journeyed on, I realized Charlie (the grandfather) had a story of his own. He was getting old, forgetful, tired and his family was beginning to worry that he had dementia. When I set out to write this story, Charlie wasn’t even in my thoughts, yet his story became the major secondary plot. And so many reviewers have already commented on their love of Charlie and his story.

I also wanted Imogen to have a couple of good friends. The story starts with her showing these women the country pub she’s just bought. I had no clue about her friends but wanted to give them their own definite characteristics. I made Jenna a fashion-conscious girl about as city-chick as they come, so I wanted the other friend Amy to be different. My Muse told me she was pregnant and I went along with the idea, never knowing that her pregnancy and subsequent baby would become a MAJOR part of the story and the first significant scene in which Imogen gets a glimpse at the real Gibson.

So I guess what I’m saying is one of my favourite parts of writing is when my Muse takes over and throws something unplanned at me. I’m learning to trust these things and go with them because they often become so much more important than they when they first jump onto the page.

Thanks for listening to me ramble on today, if you’d like to read an excerpt of MAN DROUGHT you can do so here (http://www.harlequinbooks.com.au/promo/mandrought/) and if you read it soon, you can also go in the draw to win $500 worth of Red Balloon vouchers thanks to my fabulous publisher Harlequin Books (www.harlequinbooks.com.au)

Thanks for sharing your thoughts, Rach. I love hearing about other ‘pansters’ as I’m a died in the wool ‘wing it’ kind of writer. Sometimes those flights of fancy produce the best characters and I have to say Charlie is one of my favourites in Man Drought 🙂

Rachael Johns is an English teacher by trade, a mum 24/7, a supermarket owner by day, a chronic arachnophobic, and a writer by night. She rarely sleeps. She writes contemporary romance for Harlequin Australia and Carina Press. She lives in rural Western Australia with her hyperactive husband and three mostly-gorgeous heroes-in-training. Rachael loves to hear from readers and can be contacted through her website at www.rachaeljohns.com or on Facebook (https://www.facebook.com/pages/Rachael-Johns/260103224001776) 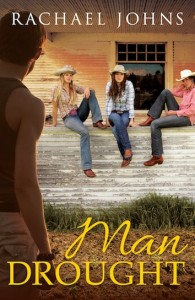 her husband. Tired of being haunted by the painful memories of her old life, Imogen set her last remaining hopes on the little town and, in particular, pouring her heart and savings into restoring The Majestic Hotel to its former glory. But while the female-starved town might be glad to see a young woman move in, not everyone is happy about Imogen’s arrival.

Sheep and crop farmer Gibson Black once dreamed of having the kind of family his grandfather reminisces about, but he’s learnt not to dream anymore. Living in the mostly male town suits Gibson down to the ground…and he won’t have anyone — least of all a hot redhead from the city — change a thing. 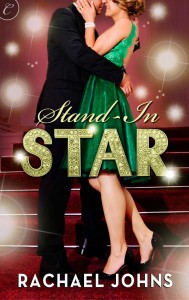 As an anthropologist, Holly McCartney is more comfortable in a museum than shopping on Rodeo Drive. She isn’t prepared for the media frenzy on her arrival in L.A. to accept a posthumous acting award for her late sister….or for her sister’s gorgeous friend Nate Devlin to come to her rescue. Though he resents her for some reason, she can’t fight their irresistible chemistry—especially when the paparazzi force her to stay at his mansion.

Photographer Nate only agrees to help Holly survive Hollywood for her sister’s sake, but she soon gets under his skin in a way no other woman has. The more time he spends with her, the more his attraction grows and he finds himself opening up to her in ways he never expected. But will ghosts of the past stand in the way of their perfect Hollywood ending?

17 thoughts on “Let the Muse Take the Lead”