The morning started at 4 am with a local tinnie driver doing a donut around Roo Bin Esque. Luckily I wanted to watch a meteorite shower so I was happy to be awake.  Sadly the clouds had other ideas and for once the stars and meteorites were hidden from sight.

Dawn broke with a sigh of a breeze and promptly ran out of energy. (I know the feeling!) Motors on we headed for Hinchinbrook Island and a refuelling stop at Cardwell at the top of the channel. The day turned to glass. Even the birds seem to flap languidly by.

The Lucinda Pier stood out more than usual in the calm conditions. The contrast between it and the majesty of the mountains on Hinchinbrook couldn’t have been more stark. The last time I was this close to the those craggy rockfaces I was climbing up to see the wreck of a Liberator bomber which crashed during World War 2. You can read about it on one of the first blogs I wrote. (It’s here.) 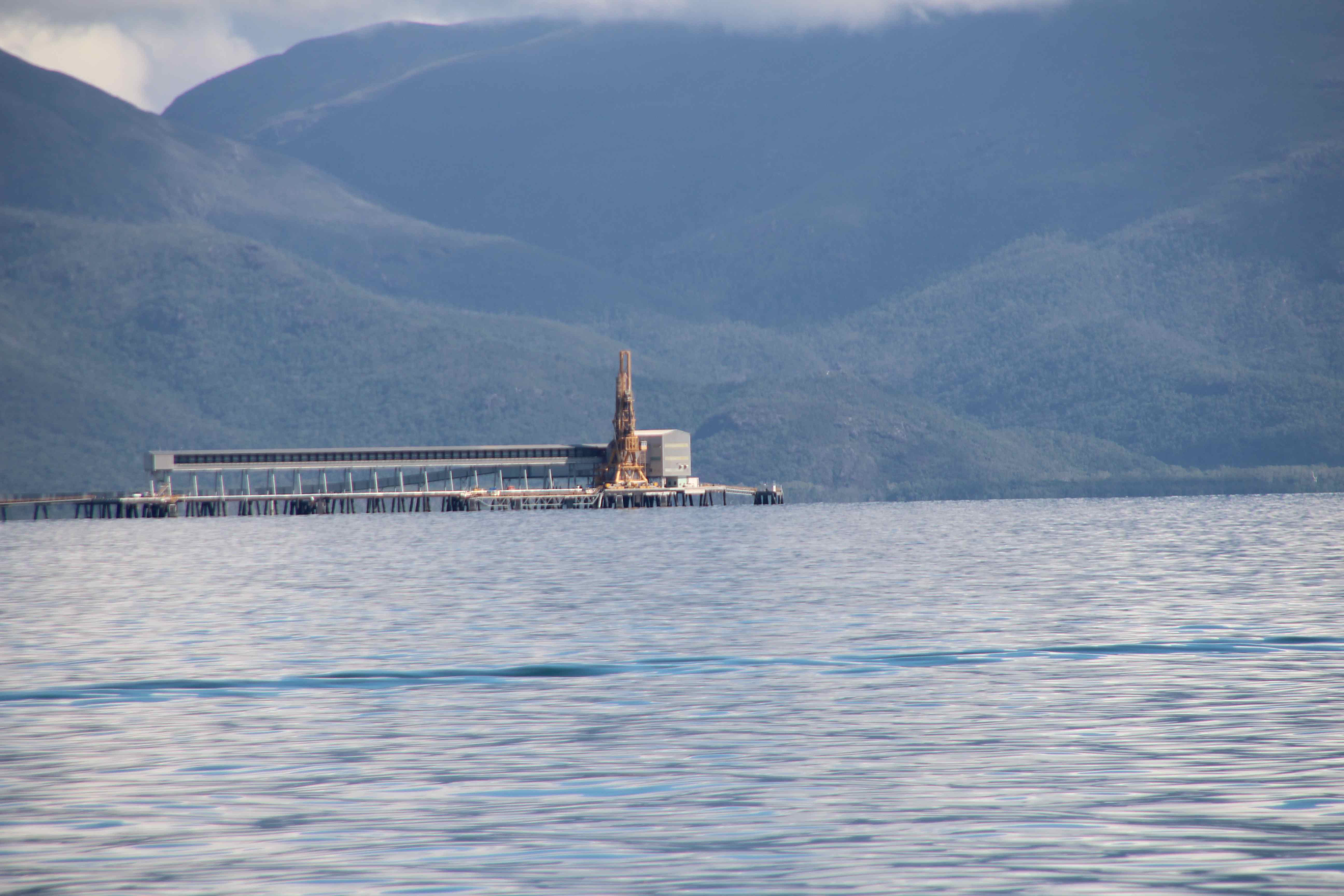 For those of you who’ve never heard of Lucinda Pier it’s a 6 km long enclosed loading jetty for the sugar industry. It was out of action after Cyclone Yasi, but I believe it’s working again for the start of the new cane cutting season. It’s the longest jetty of its kind in the southern hemisphere and is pretty darned impressive! Glad I don’t have to walk to the end for work every day… 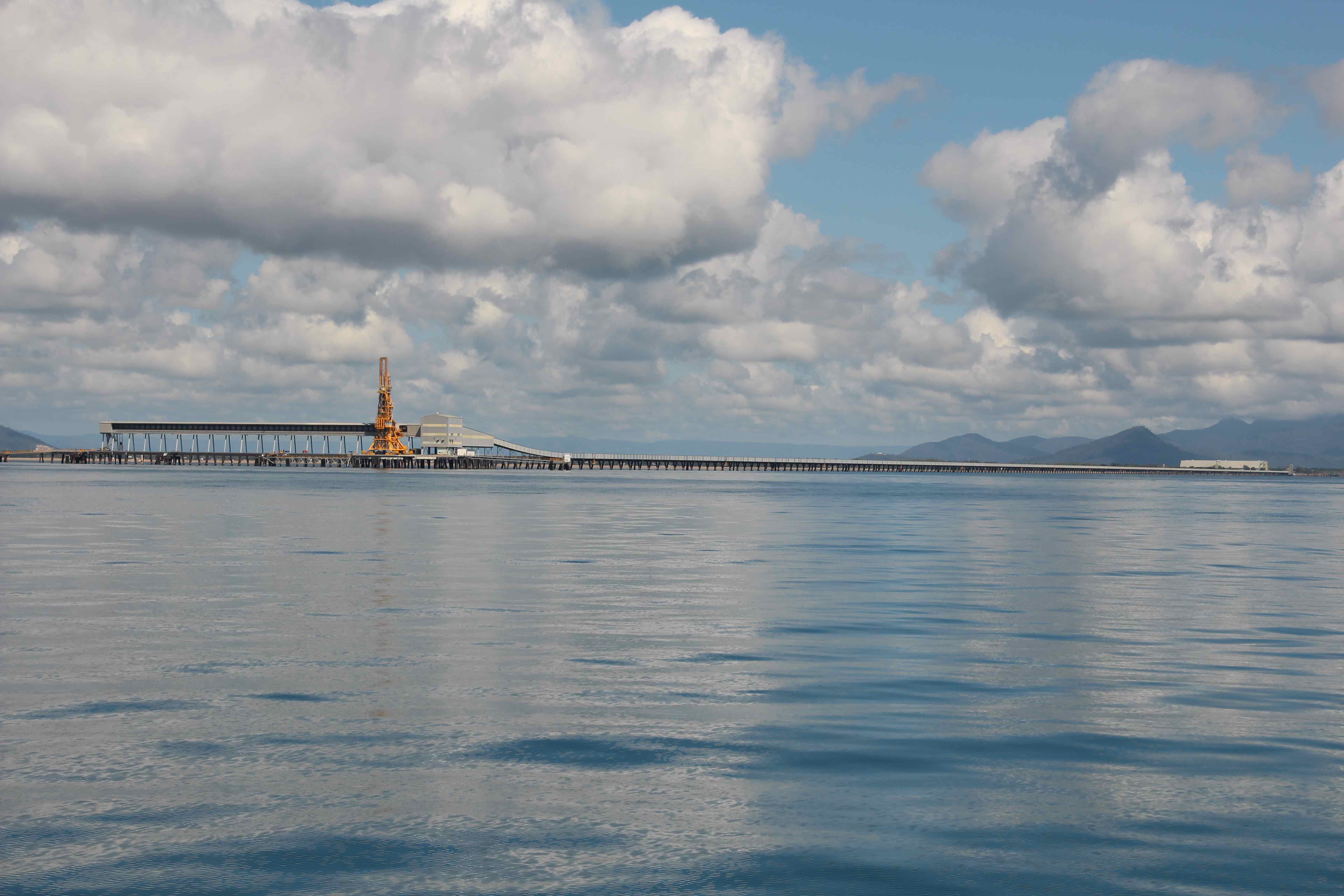 We steamed up the channel beside it, dutifully ticking off the marks as we went, and heeding all the warnings about changed conditions since Yasi. There had to be twenty other boats out there and strangely we were the only law abiding sailors. Something about being the new kids on the block, I suspect…

When we left Brisbane I had no intention of sailing up the inside of Fraser Island, or Gladstone, or Hinchinbrook Island which just goes to prove that sailors need to be flexible – I can be stretched! The magnificent scenery was worth the extra miles. It’s a shame my photos don’t do the rugged mountains justice. 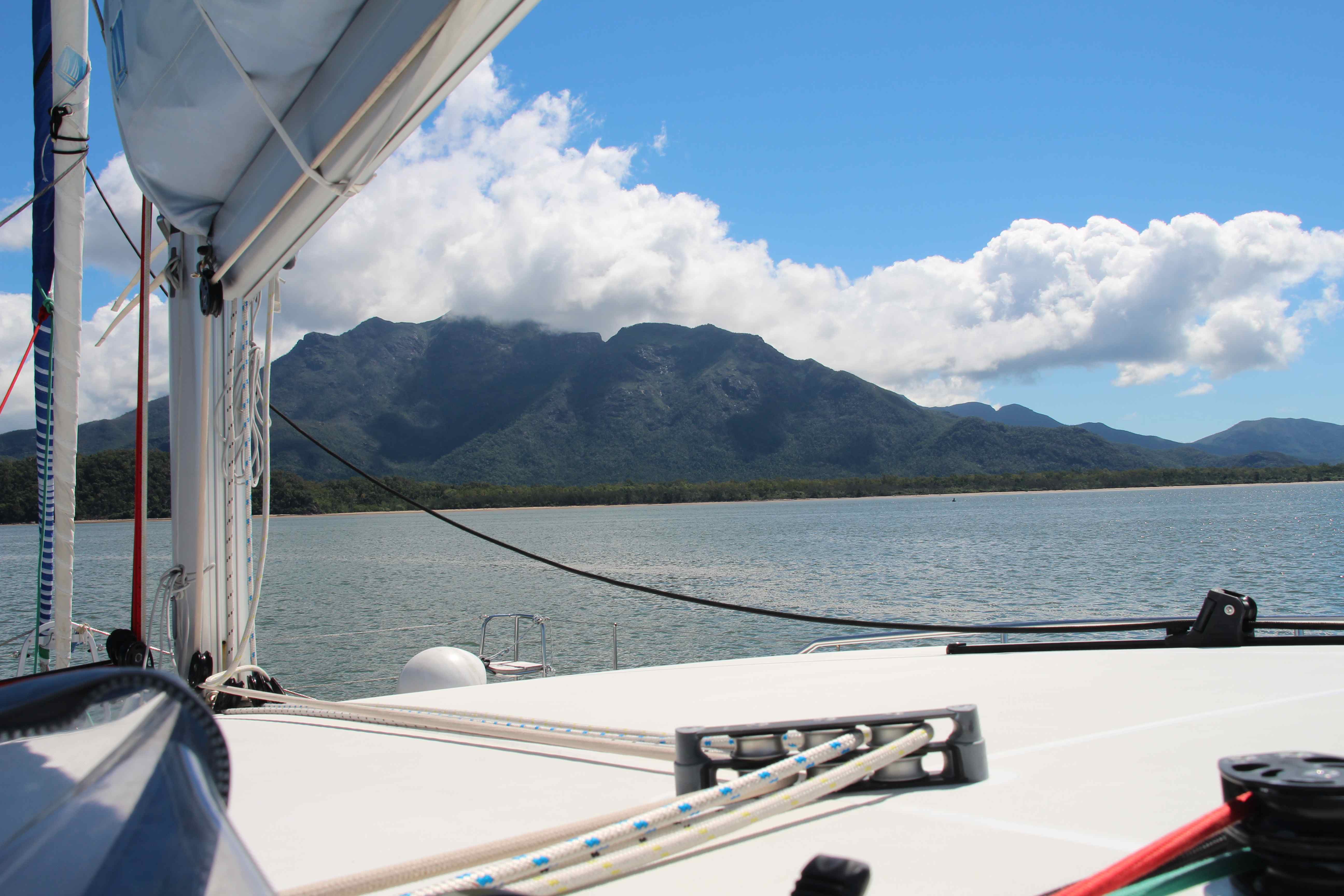 By mid afternoon we were off Cardwell and the wind had decided to whip up a choppy little swell. It made life getting ashore with four fuel drums a little trickier than we’d planned but hey, this is an adventure right?

Cardwell has a special place in my heart as it’s been battered more than its fair share of times by mother nature in recent years. Yasi took a very big swipe at it and over two years later the repair works are really only getting under way. Mighty trees that used to provide cool shade are still struggling to regrow. The foreshore is a mess and while I understand the reasons I’m disappointed that a rockwall is being built along the entire beach front. 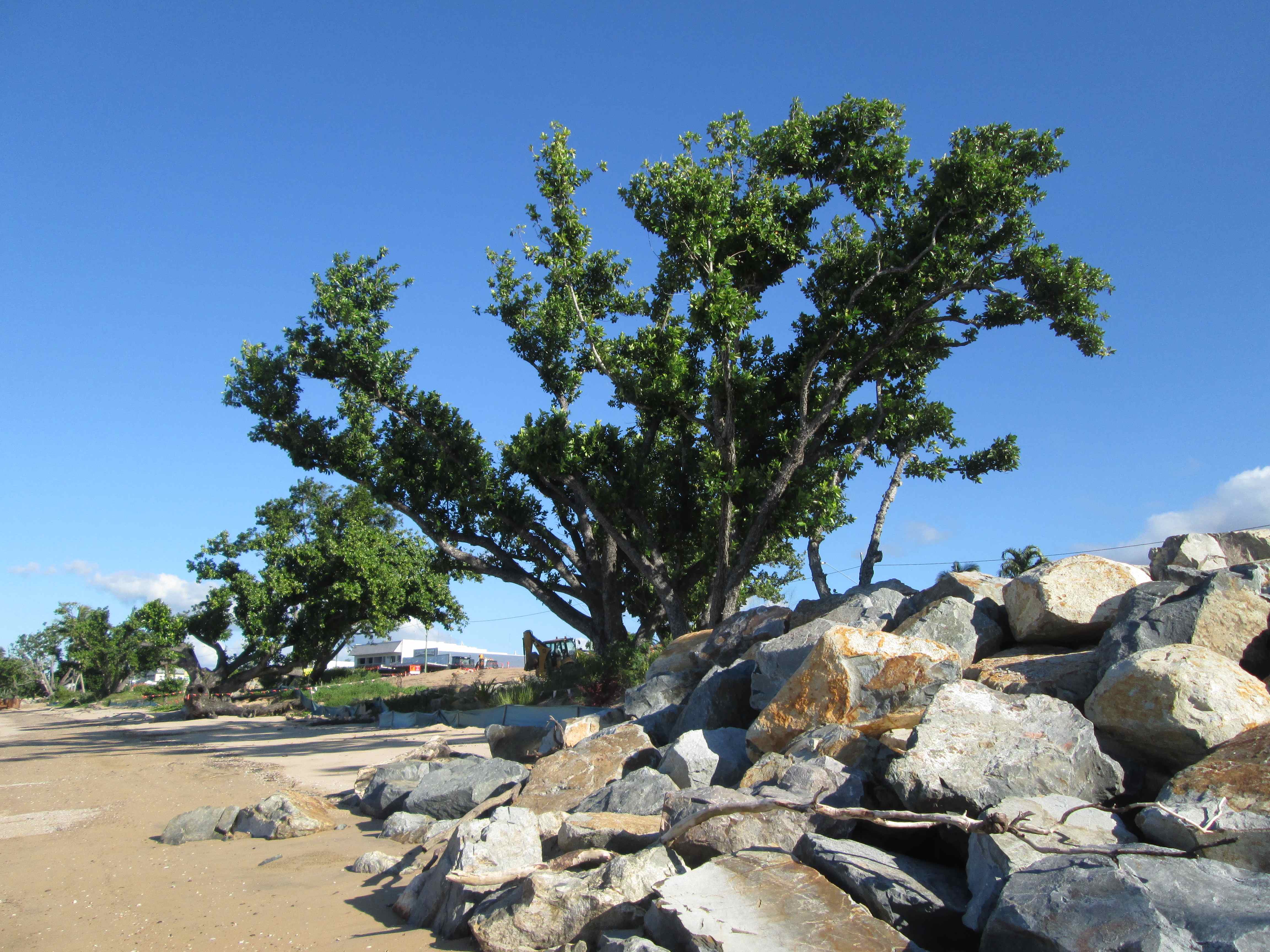 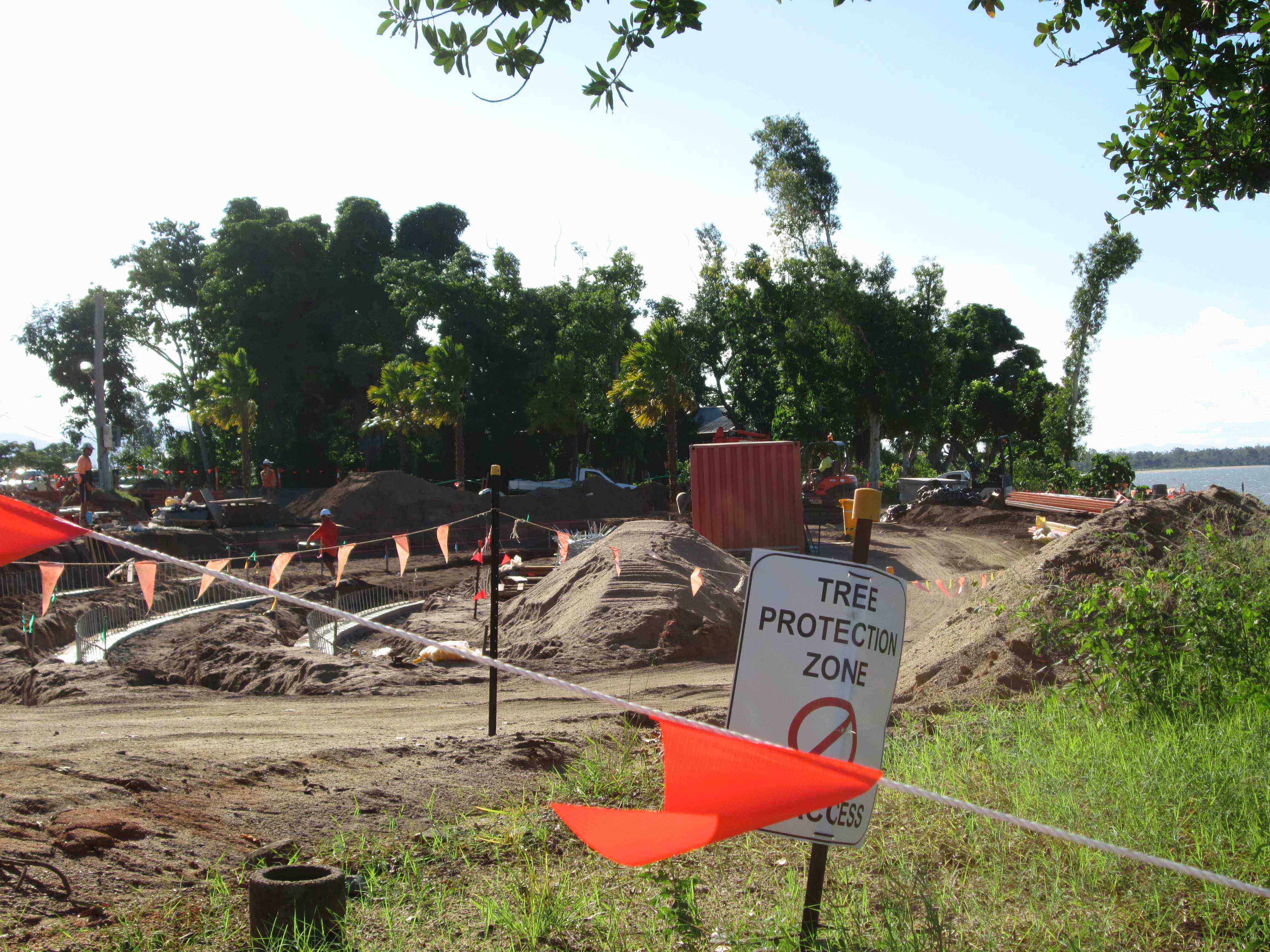 Capt G had to lug the fuel drums up the beach and over the roadworks, much to the mystification of the guys wielding the ‘stop go’ signs… Zeus and I stood guard on the dinghy which proved more challenging than I expected. By the time Capt G was back with the fuel the dinghy was up to the gunnels with water and I was soaked from bailing water. Zeus was ecstatic playing with sticks.

So, with the dinghy half full of water, 80 litres of diesel in the four drums, a very cranky staffie who did not want to get into a wet boat, 2 litres of milk, and a couple of drowned rats masquerading as sailors, ‘Joey’, putted back to ‘Roo’ through a rising sea. We’d run out of time to get to our preferred anchorage so we headed back down the channel to Scraggy Point – pretty apt considering the disreputable state of the three of us!

And then the night settled. Glassy calm and a zephyr of a breeze.

Back to the sublime again. 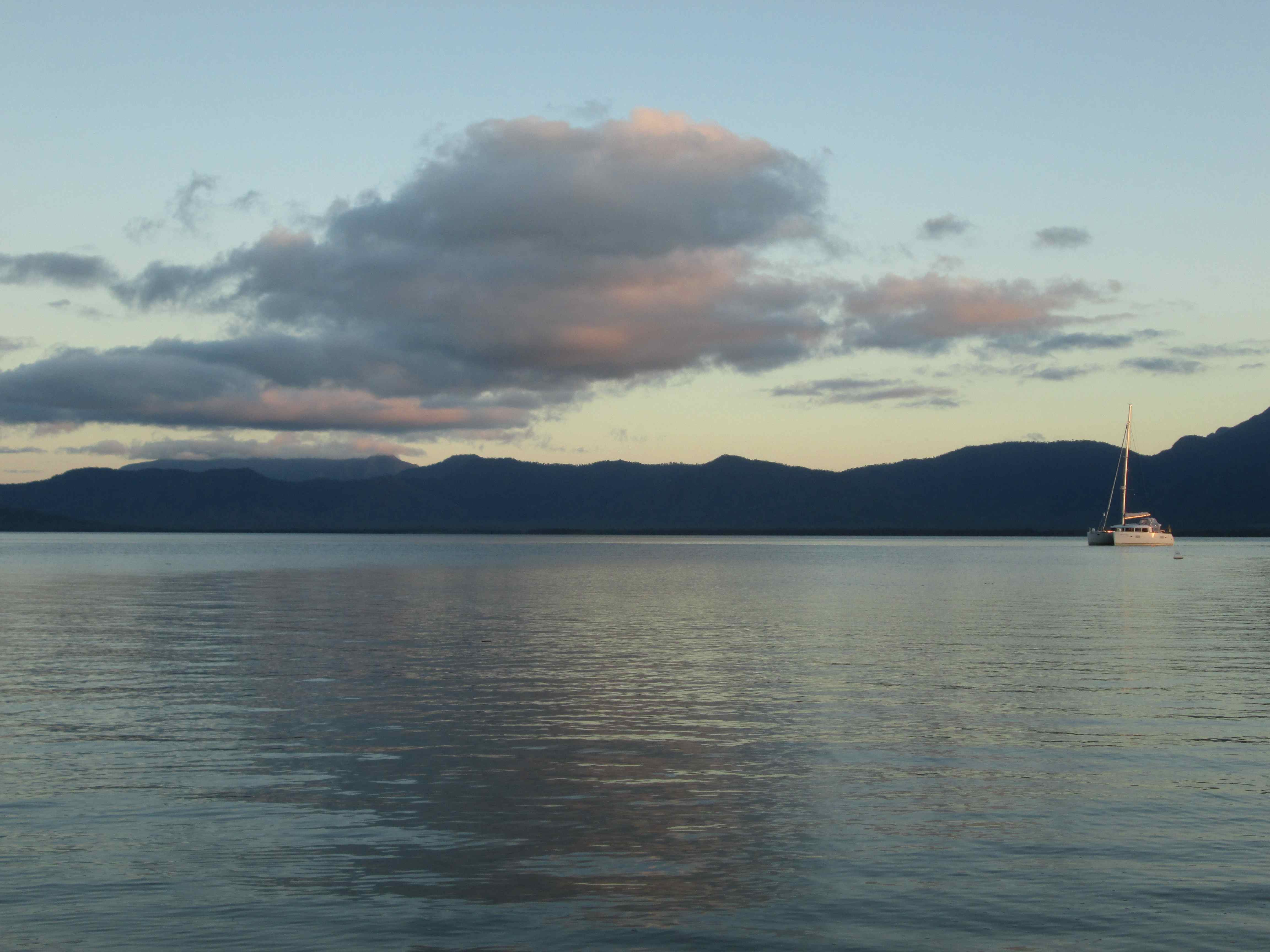 8 thoughts on “Sublime to the ridiculous”