Yesterday had a bit of everything. Sunrise was sublime and with only one other yacht anchored in the huge bay we felt as though we were a million miles from civilization. Then the dropping tide brought with it the revving of engines as Rainbow Beach turned into an eight-lane highway for dirt bikes and four-wheel drives. 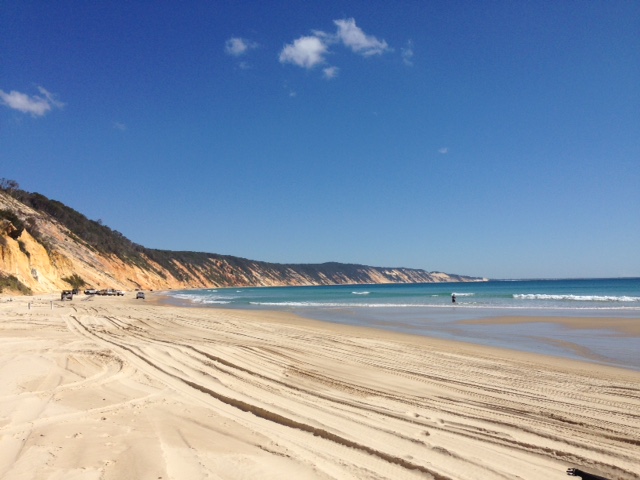 Capt G joined in the noise pollution and started the generator so he could vacuum Roobinesque. After the boat was cleaned to his satisfaction we decided we had time for a quick paddle ashore in the kayaks. I loaded the dry-bag backpack with my camera and we headed off with the wind and tide against us. It was obvious once we reached the shore that the waves breaking were a little more significant than they appeared from out to sea.

I was dying for a walk on the beach, despite all the traffic whizzing along it, so I convinced Capt G to head for an area between two gutters. He wasn’t happy but didn’t call ‘Captain you must listen’ so in we went. He got the laugh of the day when I turned broadside and did a perfect roll to finish washed up on the shore, clutching my Go Pro in one hand and paddle in the other. Thankfully the dry bag did work so at least my camera was dry… Capt G had no chance of keeping a straight face either. He was desperately hoping the GoPro had been filming but thankfully for me it wasn’t. At lease when we headed back out, despite copping two waves in the chest, I managed to stay in the kayak this time! Seems I may be more than a little rusty 🙂 The Capt is still smirking – seems he thinks there are parallels with the overconfident Aussie cricket team…

Once I’d stopped my teeth chattering we weighed anchor and headed for the Wide Bay Bar. It’s notorious for being gnarly and we’d waited an extra day to let the swell abate a little. Coastguard Tin Can Bay assured us all was well this morning and gave us the coordinates to keep clear of the breaking waves. By the time we started our run three other yachts had already crossed and six others were lined up behind us. It felt lumpier than previous crossings, but the GoPro footage showed a rolling swell and pleasant day. I guess nerves play a part in making it seem more formidable. 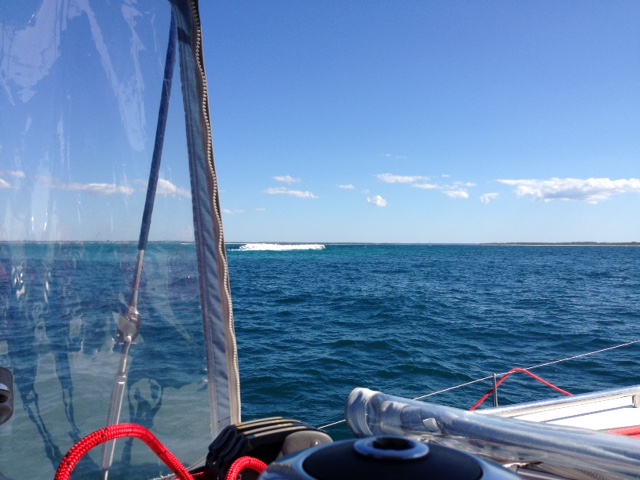 Once we were safely past Inskip Point Capt G decided to head further up Fraser Island instead of anchoring in Tin Can Bay. It’s at moments like that when I realise a lifetime of flying and planning ahead still holds me captive. Going with the flow isn’t really an option when you’re flying an aircraft to a prescribed destination… I’m sure over time I’ll find spontaneity a whole lot easier to manage!

We did find a lovely anchorage at Snout Point and took the dinghy ashore. Sunset was glorious and apart from the Drag Queen waking us at 2 am because we’d hit the anchor range we had a good night’s sleep.

Today I need to finish up my lesson plan for next weekend’s writing course in Brisbane and Capt G plans to continue tickling the fish with his lure. 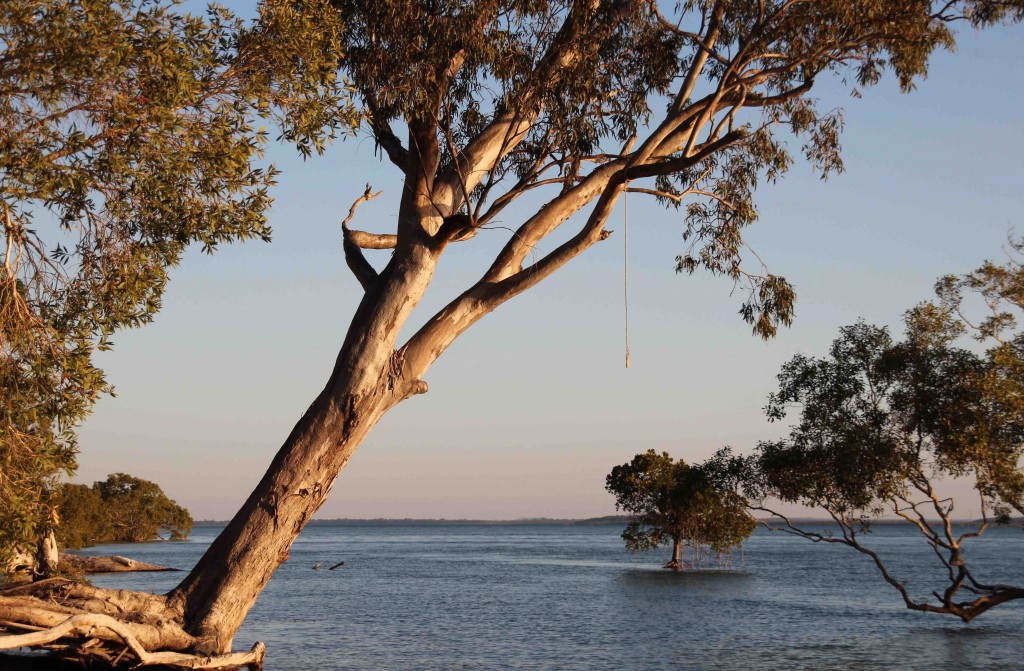 The view from Snout Point 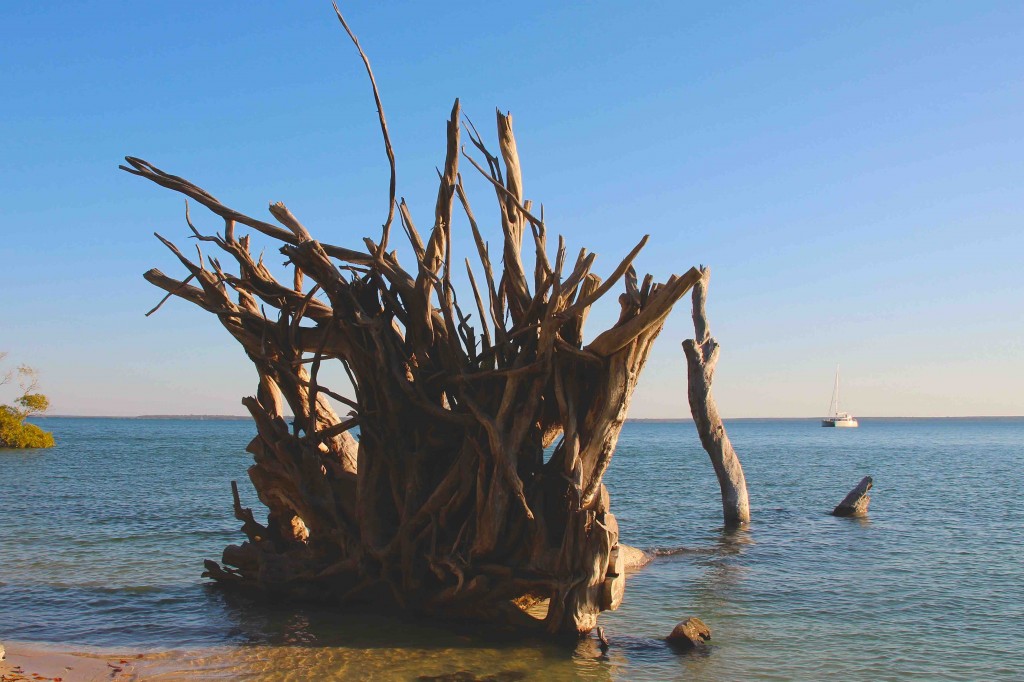 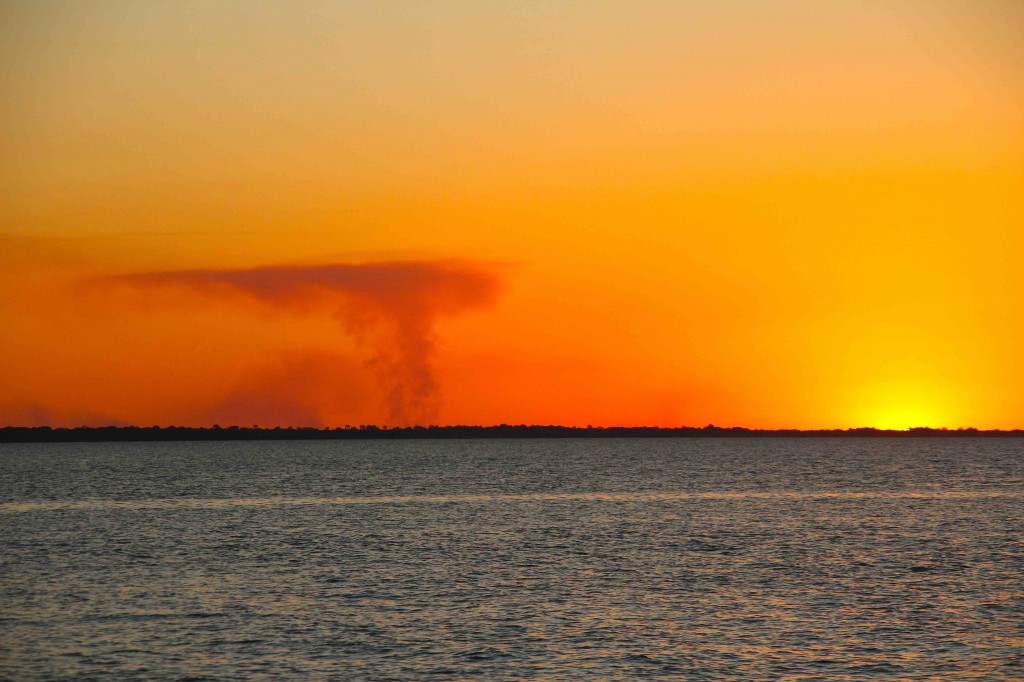 Sunset over the Great Sandy Strait

2 thoughts on “Crossing the Bar”